North Wins Big Against the J-Hawks 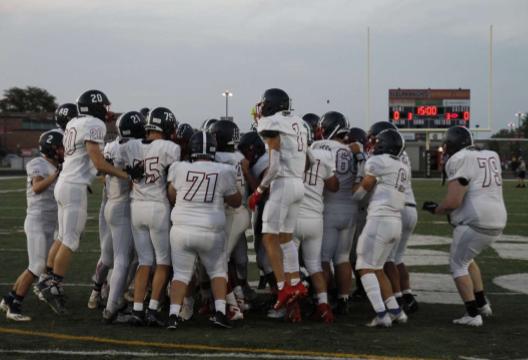 On Friday, September 17th 2021, Belvidere North Varsity Football had their third game of the season at Auburn High School playing the Jefferson High School J-Hawks. The Blue Thunder beat Jefferson with an absolute blow out of 54 – 12. This game leads the team into next week going 3 – 0.

Every game so far this season has been a good one for the boys as you can see by their stats. It was an amazing night for Junior Nicholas Winters with nine tackles and one interception, alongside Senior brother Aaron Winters also with a great performance, both as linebackers. “We came in low energy then realized we aren’t doing what we usually do after down. We picked it up and did what we do best. Play together.” says Senior Cornerback Isaiah Brown. A major contributor to the teams newfound success this year after a tough ride last season has been learning that they’re good individuals, but unstoppable as a team. Teamwork and respect for one another is the reason they’re currently undefeated so far.

Many parents and students came to support their team for another victory. The BlueCrew had the student section flooded with peers doing a Hawaiian theme. This year school spirit and support at games has been through the roof. Next week the Blue Thunder will play at Home Stadium for the Homecoming game against crosstown rivals Belvidere High School. Home games always have the band, color guard, cheerleaders, poms, student section, and a huge amount of spectators to hype the boys up for a good game.

Belvidere North’s biggest competition in the Nic-10 this current season is going to be Hononegah High School. The Hononegah Indians are also 3 – 0 right now. They play East High School at Guilford High School’s fields this Friday. It will be interesting to play each other later down the road on Friday October 1st at Hononegah’s fields.