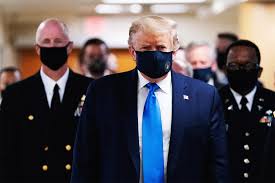 On October 2, President Trump and the First Lady Melania both tested positive for Covid-19. They got the test because an aide of the White House had recently traveled and contracted the virus. The President was taken to Walter Reed National Military Medical Center. He has been there for the past few days and arrived at their home on Sunday.
With the positive test from President Trump, there has been a lot of backlash from the more democratic people. Trump has recently called the virus a “hoax” and many people made sure to bring that statement up. Trump also has claimed masks don’t work and he didn’t wear them often unless it is needed. Former Vice President Joe Biden tweeted about the President hoping for a “swift recovery” from the virus he contracted. Many people thought this all might be a setup from Trump trying to prove that Covid-19 isn’t as serious as it seems. That claim has been fact-checked by many people who were around Trump while he was in the hospital.
When Trump arrived at home, he stood on his balcony while the press was out recording. People noticed the President seemed to have trouble breathing looking like he was in pain. After his stay in the hospital, he claimed him contracting Covid-19 was a “blessing from God and I caught it.” He claimed this because of the drug he got to use which he also claims to make him recover very quickly. He posted a video on Twitter talking about how the drug will be free very soon. The drug he was referencing has been very limited to people up to know.
President Trump is almost fully recovered if not already. He claims he has been feeling great and at one point he said this is the best he’s felt in 20 years. He and Melania both are at home, nearly recovered, and preparing for the election.