Mike Tyson is Getting Back in the Ring? 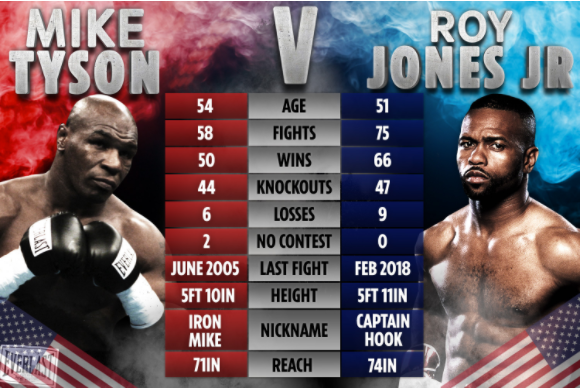 It’s been fifteen years since Mike Tyson has been in the ring. That’s all going to change in a matter of weeks. In California on Thanksgiving weekend 54 years old Mike Tyson will take on 51-year-old Roy Jones Jr. While comparing the two boxers Tyson at one time was one of the most feared heavyweight boxers having 50 career wins with 44 knockouts. Tyson was also the youngest boxer to hold a title at just 20 years old and between 20 and 54 years of age, he’s been in movies and made millions of dollars.
On the other hand, you got Roy Jones Jr. Retiring in 2018, another crazy man, though a few years younger than Tyson he held titles in four divisions including middleweight, super middleweight, light heavyweight, and eventually heavyweight. Jones also had a good career record of 66 wins with 47 knockouts. Starting his career with an almost flawless 50-0 record is astonishing. He was then named best boxer of the 1990s by Ring Magazine and that speaks for itself. The man had quick explosive power that the world had only started to see by Tyson. This fight has been wished upon by thousands of people for years and it finally coming true in 2020. That will only happen if Covid precautions are made and everyone is still healthy in a month.
This fight is going to be on Pay Per View Thanksgiving weekend and it will be a fight talked about for centuries. No one has seen this old of men fighting at such stakes and having their reputations on the line. You will not want to miss this fight, hopefully, everyone gets their money’s worth. There have already been jokes made saying that hopefully, Tyson doesn’t try to bite Roy Jones Jr’s ear, which could very possibly happen again if the conditions are intense.