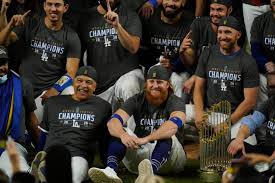 This year’s season was the shortest regular season in MLB history, leading to the most difficult postseason yet. This year, the two top seeds from each bracket were the Tampa Bay Rays and the Los Angelas Dodgers; the team picked to win the World Series. In the National League Championship Series, we see the Dodgers fall back 2-0 against the Atlanta Braves. They came back by winning four games to the Braves one win in return. We also saw an unexpected turn in the American League Championship Series when we saw the Tampa Bay Rays nearly lose a 3-0 series lead that they had against the Houston Astros, causing them to win it in seven games.
This World Series was a very rare one, both of the top seeds from each league got to play in the World Series, this is the last time that this has happened since 2013, but only the second time that it has happened in the century. This postseason, both teams had players having MVP-Caliber postseasons with players Corey Seager and Mookie Betts playing very well for the Dodgers, and Randy Arozerena playing outstanding for the Tampa Bay Rays.
There were many different records set this year during the World Series, those being the most strikeouts in the postseason set by Clayton Kershaw with 207. There were also more records broken, but by Randy Arozarena, setting a record for the most postseason hits by a rookie, the most postseason home runs, and the most postseason hits.
This series was anything but overpowering by one team, the Dodgers won game one, the Rays come back with a win in game two, the Dodgers come back with another win in game three, only to leave the Rays to win game four, but after this, the Dodgers decided to pull through and close the series out by winning game five and six. This was the first Dodger World Series win since 1988. The World Series MVP was to be named later and was announced to be Corey Seager, shortstop for the Los Angelas Dodgers.