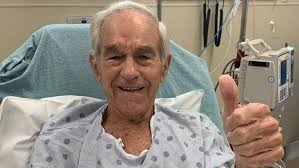 Former Texas congressman and former presidential candidate Ron Paul were hospitalized on September 25th. He suffered a medical condition after slurring his speech and talking gibberish.
He was interviewing a Livestream on youtube. It was later brought to attention that he had suffered a stroke by the specialist Andrew Rogov of a south shore university hospital in new york.
“With the difficulty speaking and the facial droop, it’s very concerning that he may have suffered a stroke.”
September 26th there was a photo posted on social media of Paul in a hospital room smiling with a big thumbs up. His son senator rand paul from Kentucky tweeted about the incident
“Thank God that Dad is doing well”
Dr. Ron Paul is expected to make a full recovery from his recent supposed stroke.
A stroke is a sudden interruption in the blood supply of the brain. Most strokes are caused by an abrupt blockage of arteries leading to the brain. Other strokes are caused by bleeding into brain tissue when a blood vessel bursts
Symptoms of a stroke include; Sudden numbness or weakness in the face, arm, or leg, especially on one side of the body. Sudden confusion, trouble speaking, or difficulty understanding speech. Sudden trouble seeing in one or both eyes. Sudden trouble walking, dizziness, loss of balance, or lack of coordination
If you see strange or unusual behavior like these symptoms in any person, seek medical help right away.
Some athletes and influencers strongly bring awareness to strokes and speak of the symptoms. Paul George, an American basketball player, brought awareness by doing a PSA commercial in 2016. He talks in his PSA about his mother having a stroke when he was a child. He covers the acronym F.A.S.T. Face drooping. Arm weakness. Speech difficulties. Time to call 911.
His PSA was a huge help to many people because of his large following due to his talent on the basketball court. You can make a difference and spread awareness as well and tell others about F.A.S.T.