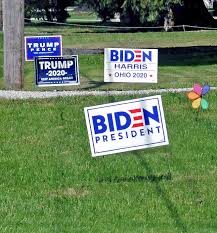 A few months ago it started. Joe Biden was officially the leader of the democratic party against Donald Trump for the position of president of the United States. I didn’t think much of it, because I have no interest in politics. But along with Covid-19, there was nothing better to talk about other than what was going on in this “great” country.
People started voicing their opinions on politics much more. Industries made signs for their beliefs. I call it the lawn wars. Trump pence signs, maga hats, and flags against Biden Harris, the Obama pro, and love for all people.
These 2 sides are so competitive that it became the most chaotic, the longest, and the closest presidential election of all time.
I’m not picking sides here, I’m just exclaiming how ridiculous the American people are being. Citizens have been putting up signs and flags all over the place in their lawns. This is completely legal. These actions would be fine if that was the end of it, but of course, it’s not. People have been stealing these signs and flags. People have been destroying others’ property on both sides of this double-edged sword.
All over social media, it seems I can’t escape it. I see on Snapchat a person smashing a Biden sign. I see on Tik Tok people putting booby traps on their trump flags that way their property does not get destroyed.
The fact is opinions don’t matter. The only thing that really matters is how u feel about yourself and how you treat other people. Well, I guess that’s 2 things that matter. whoops.