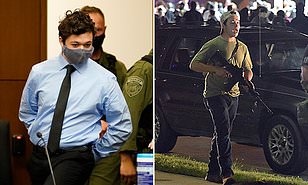 Kyle Rittenhouse was released from jail in Wisconsin on Friday afternoon, November 20th, after his attorneys posted $2 million bail, setting the teenager free as he awaits trial for fatally shooting two men and wounding a third during summer protests in Kenosha. Rittenhouse spent the past 2 ½ months in custody on a murder charge and other counts stemming from his shooting of three men with an AR-15-style rifle during protests on August 25th.

The 17-year-old’s release was funded by donations sought by his attorneys, who appealed to the political right, where Rittenhouse is popular. Those are the same lawyers who are also seeking to overturn Democratic President-elect Joe Biden’s victory.

An attorney set up the payment and then a private security detail transported him from the jail about 2 p.m. Friday, according to Sgt. David Wright of the Kenosha County sheriff’s department.
One of Rittenhouse’s lawyers, John M. Pierce, said previously that the bail money would come entirely from funds raised by a nonprofit that champions conservative causes led by another of the teen’s attorneys.

It is unclear where the teen will live pending trial. He previously lived with his mother, Wendy Rittenhouse, in Antioch, but she moved to an undisclosed location after the shootings and has cited threats to her safety.

The next hearing is scheduled for Dec. 3. Rittenhouse’s lawyers have been seeking donations for his legal defense since shortly after he was charged.