DEBATE: Marijuana in the US 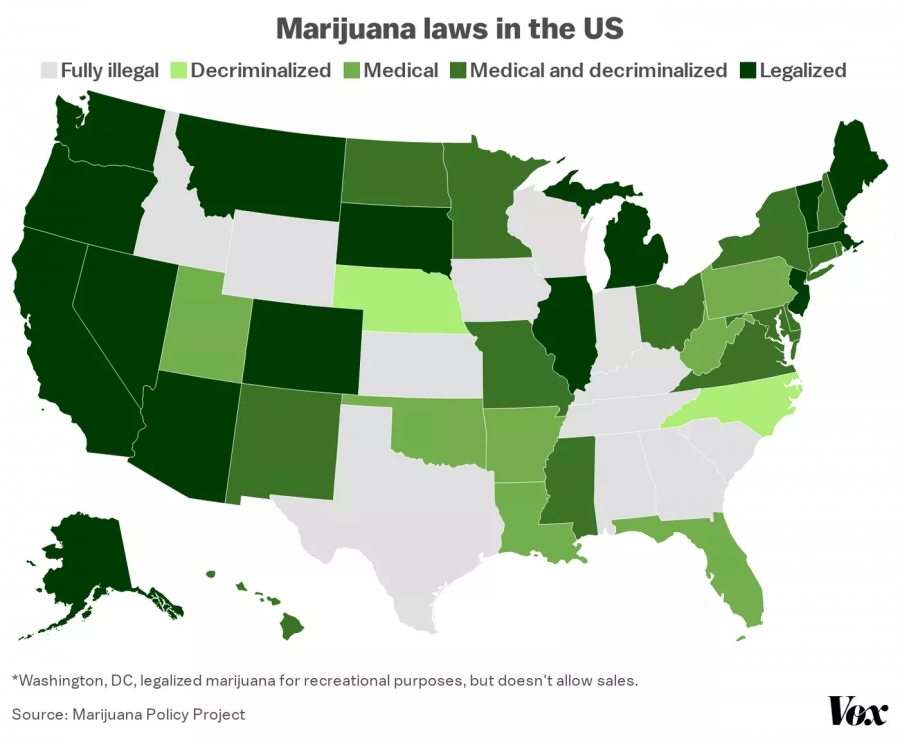 The Argument Against Legalizing Marijuana:

The legalization of weed is growing rapidly. Marijuana laws are changing constantly. From medical use, recreational use, and anything in between, many states are continuing to legalize this addictive drug. So how does this affect us? Why does this matter?

The commercial marijuana industry cares more about making a profit than protecting public health. Cannabis campaigners make use of their big advertising budgets to convince voters in Arizona, California, Maine, Massachusetts, and Nevada, that legalizing recreational marijuana will not only be economically beneficial to the state but will also help save lives.  Promoters say that legalizing weed reduces the abuse and overdose of opioids. A recent article in STAT pointed to a 2015 white paper from the National Bureau of Economic Research saying that access to medical marijuana was associated with a 16 percent decrease in opioid overdose deaths and a 28 percent reduction in opioid abuse treatment admissions. Now what the article didn’t point out was increases in traffic fatalities, hospitalizations, and marijuana-related poisonings following the legalization of recreational marijuana.

In Washington State for example, within a year of legalized marijuana in that state, the number of traffic deaths due to marijuana-impaired drivers doubled. In Colorado, the number of fatal accidents involving marijuana rose by 62 percent since its recreational use was legalized in 2012. Legalizing marijuana may seem good on the outside but if you look at the facts marijuana has proven to ruin many more lives than when it wasn’t legal. Having marijuana legal means more people use this harmful substance. This is a bad thing because as I stated before it causes more accidents which causes more deaths. Having this legal almost says it’s a good thing that draws teens in. Having this substance legal makes it easier for teens to get to it. Marijuana affects brain development, which affects memory, impairs thinking, and learning functions. Marijuana does way more bad than good.

The House of Representatives has approved legislation that would decriminalize marijuana and seek to “address the devastating injustices caused by the War on Drugs.”
Friday’s vote in the Democratic-led House is the first time a chamber of Congress has voted on federal marijuana decriminalization. It has little chance of passing the Republican-led Senate, however.
Quite frankly I believe that it’s a great thing to have been decriminalized. I don’t see it as any different than carrying other stress-relieving drugs like smelling salts. Both are beneficial in small amounts. But can be harmful in large quantities.
There are several points on why marijuana should be legalized. The first point I’m going to make is the economy. “For every $1.00 spent in the marijuana industry, between $2.13 and $2.40 in economic activity is generated,” said Alan Price from thinkprocess.org. The amount of use is astounding and a fair tax on these products would completely change the way we see money on a national scale.
The second point I’ll make is the cost of enforcement for these pointless laws would not be spent on marijuana enforcement but would be spent in other departments of the police forces. This is money that can be going towards better courting systems, proper equipment for all police forces, and more law enforcement to take care of real crimes. This brings me to my final point.
Crime goes down when marijuana is legalized.
Studies show that medical marijuana dispensaries decreased crime in their neighborhoods because of an increased security presence and more people walking around the area. Research indicates that people drink less and alcohol sales drop in places where marijuana is legalized. The amount of crime and violence caused by alcohol use is ten times higher than by marijuana use and alcohol is a factor in around 40% of violent crimes.
It just does not make sense to me more than anything that alcohol is legal when it makes less money and does more harm but that’s a different debate.