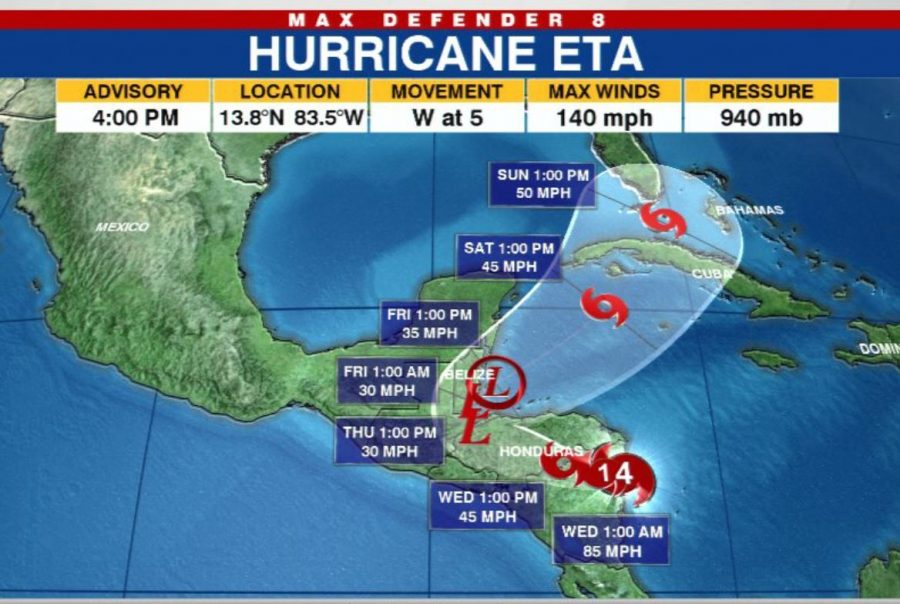 Hurricane Eta was a devastating Category 4 hurricane that wreaked havoc across parts of Central America in early November 2020. Eta originated from a tropical wave in the eastern Caribbean Sea on October 31. The system rapidly organized as it progressed west, with the cyclone ultimately becoming a Category 4 hurricane on November 3. With a peak intensity of 150 mph, it was the third most intense November Atlantic hurricane on record behind the 1932 Cuba hurricane and Hurricane Iota just two weeks later.

Eta rapidly weakened to a tropical depression as it meandered across Central America for two days before moving north over water. It later reorganized over the Caribbean as it accelerated toward Cuba on November 7. Over the next five days, the system moved erratically, moving through the Florida Keys and stalling in the southern Gulf of Mexico.

More than 10,000 people sought refuge at shelters in Puerto Cabezas and surrounding villages. Eta knocked down power lines and trees while damaging roofs and causing flooding in Puerto Cabezas. Overall, at least 178 fatalities across Central America have been attributed to the storm, including 74 in Honduras, 53 in Guatemala, 27 in Mexico, 19 in Panama, two each in Nicaragua and Costa Rica, and one in El Salvador.

Relief efforts for those affected by the storm were extensive and widespread, involving several countries. Approximately 2.5 million were affected by the storm, including 1.7 million in Honduras. Many Emergency Response Units were to be dispatched globally to help support affected people. About 98 tons of food and water were given to Nicaragua and Honduras from Panama. People left homeless were moved to various shelters after the storm had passed. Donations worth millions of USD had been given to affected countries to help recoveries. However, just two weeks later, all efforts were hindered greatly by Hurricane Iota.